Members are welcome to attend the Association Apiary meetings as advertised on the NEWS page.

The track to the apiary can be rutted and muddy. Please let us know if you require adjustments or access assistance. If you would like to go along, please check timings and remember to wear clean suits, gloves and boots. There are always plenty of suits available to borrow.

Remember that the weather can lead to last minute changes … a quick phone call could save a wasted journey!

The Apiary Management Committee -AMC –  have agreed to stand for another year. They have updated the policy for the new season. Please take time to have a read … it explains the aims and management approach  we hope to achieve!
WDBKA Apiary Management Policy 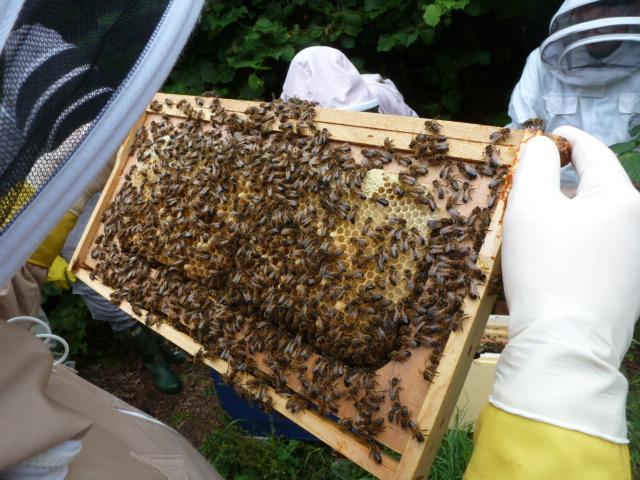 The July member sessions at the Apiary got off to a flying start with 17 members attending the first one. Sadly interest dropped off on subsequent weekends with no more than three helpers in addition to the two members of the Apiary Management Team at each one.
Several colonies have kept us guessing. The swarm we collected outside the Apiary in May, which built up very quickly, has continued to make half-hearted attempts at superseding but the old queen is still present. At several inspections there didn’t seem to be much in the way of eggs or young brood in some of the colonies but many will be starting to reduce the size of the brood nest now.
All the remaining colonies that were split or superseding now have functioning queens, although three new queens have yet to be spotted.
There has certainly been plenty of nectar coming in at last and there are currently around six full supers of honey across all nine colonies. We plan to take this off for extraction in August, providing the bees don’t eat it before then.
The varroa counts, which have previously been well below the treatment threshold, have started to creep up so all colonies will get an autumn treatment next month. We have decided to use Apistan this year as it has not been used at the Apiary for at least five years and we felt we should try to vary the treatment from the thymol based Apiguard, that we have been using for the last several years.

The main focus of the Apiary weekly checks in June has been continuing to check for swarm preparations and in colonies that had been split, checking for signs of new queens laying and finding those queens and marking them.
We now have nine hives.
The swarm which we caught outside the Apiary has a laying queen of unknown age who is laying spotty brood. We thought that the bees were trying to supersede her at the check in mid June so we are watching for signs of a successful replacement.
We have three new 2021 queens all laying well. A further 2021 queen failed very quickly after starting to lay early in the month and her colony has now made queen cells.
We probably lost a swarm from our strongest and most temperamental colony in the middle of June. When they were inspected on 12th June we could find no sign of a queen but there were multiple queen cells so we split the colony, which was on a brood and a half into two. Any new queens should be laying by mid July.
Finally we have a 2019 and a 2020 queen that so far have shown no signs of making queen cells.
Even the strong colonies have very little honey stores. Although supers have been filled and the colonies have needed extra supers for space for bees we have found that in spells of bad weather any stores have been very quickly consumed.
At the last session in June, our Seasonal Bee Inspector, Kevin Pope, kindly checked all the colonies and demonstrated to our students how to inspect for disease. He was able to find small amounts of sac brood, bald brood and wax moth in a few of the colonies. What a fantastic opportunity for our students to learn from his knowledge and experience.

What a month of contrasts. Our first visits of May were in the cold and rain but the last visit of the month was warm with every colony very busy. At our visit on the 22nd May we found stores were dangerously low in several colonies and had to feed them but a week later on 29th May most had brood frames stuffed with nectar and we were adding supers.
From the original eight colonies, the two with the oldest queens attempted supersedure in May and we are still waiting to see if this has been successful. Two colonies have made very slow progress but seem at last to be building up. A further colony made what appeared to be a few swarm cells despite not being very big or congested. Two colonies have made swarm cells, have been split and we are waiting to see if the new queens successfully mated in the poor weather. The strongest colony has not yet made attempts to swarm.

We have been delighted to welcome the tutors and students from last year’s course to complete their practical sessions at the Apiary. There were months of planning to make sure that we could maintain social distancing. This meant recruiting additional tutors and helpers and spreading out the groups with staggered start times.
A few surprises…..
At one of the planning sessions with the tutors, we found a cluster of bees under one of the colonies that had been split and so presumed that this was a cast swarm. After much sweeping and smoking with Sally Boxall crawling under the hive stand with a nuc box these bees are now in their own space. They were given a block of fondant in the feeder on top of the nuc, ate it and decided to take up residence in the feeder rather than on the frames below. Having extricated them from there and got them back onto the frames, we found a week later they had built comb down the side feeder instead. Hopefully they will expand on to the frames when the mood takes them.
Arriving to set up for the first student session and knowing it was going to be a very long morning, one of the AMC decided to make use of the bushes round the side of the Apiary and looked up to find three clusters of bees that had probably been out all night. Most of them were retrieved and hived and have drawn out nearly a whole National brood box of frames a week later.
At the first student session a new queen decided to fly out and land on the head of a student — fortunately she was spotted by another student and put back into the hive by Caroline.
We have two more teaching student sessions in June and a visit from Kevin Pope towards the end of the month.
Hopefully by then we will have some mated, laying new queens and some honey!

Why should I join a Beekeeping Association?

Becoming a member of West Dorset Beekeeping Association puts you in touch with a network of experienced Beekeepers. We enjoy our hobby and love to share our enthusiasm for our craft. See the list of benefits on the Membership page. A monthly newsletter keeps everyone involved and up to date with events and activities throughout the year.

Meeting other members and comparing colonies in the Association Apiary helps to develop practical experience and knowledge.

Do I need to go on a training course before I keep bees?

Yes! We would always encourage anyone who might be thinking about starting to keep bees to access some training. The WDBKA  annual course for beginners  is a good introduction and gives access to ongoing training with attendance at the Association Apiary throughout the season.

How much time does it take to look after a colony of bees?

The time commitment varies through the year. During the active season each colony needs regular weekly inspections. Depending on the manipulations required this can take over an hour … or a matter of minutes! It is likely that your Beekeeping will absorb as much time as you are able to spend … once you catch the Beekeeping bug it seems to grow.

How much does it cost to get started?

A good bee suit can cost up to £100. A hive and basic equipment will be around £300. A small nucleus colony will be about £200. Sometimes local swarms are offered to members for a donation to club funds.

How much honey will my bees produce?

The amount of surplus honey each colony produces will vary from one year to the next. A good beekeeper will always be sure to leave plenty of stores for their bees to use during the winter.

A strong, well established colony could give around 50lbs if the forage and weather are favourable … but there are always a lot of variables to consider.

How do I keep my bees healthy?

The Association has close links to Kevin Pope, our local Seasonal Bee Inspector. He is always available to give advice and will visit your Apiary to check your bees.

Timely reminders are shared through the Association newsletter to guide members in good practice and to encourage close monitoring of Bee stocks.

All Beekeepers should register with the National Bee Unit.  Their website contains a wealth of valuable information. They will also send direct email alerts to raise awareness of potential issues to Beekeepers e.g. reported sightings of Asian Hornets, how to identify diseases etc..